The Chicago Housing Authority provides homes to more than 63,000 households while supporting healthy communities in neighborhoods throughout the city. Designated a Moving to Work agency by the U.S. Department of Housing and Urban Development, CHA has used that flexibility to create innovative partnerships that expand choices and opportunities for the low income families and individuals it serves. At the start of 2018, 63 percent of work-able CHA residents were working and earning a yearly average of almost $22,000

The Chicago Housing Authority is a municipal not-for-profit corporation, governed by a Board of Commissioners consisting of ten members.  The commissioners are appointed by the Mayor.

CHA was created in 1937 to own and operate housing that was built by the federal government under President Franklin Roosevelt's Public Works Administration.  The first three housing projects, built in the late 1930's, included Jane Addams, Julia C. Lathrop and Trumbull Park Homes.  They were all part of Roosevelt’s New Deal programs to provide affordable housing for low-income families and combat blight.

During World War II, CHA housing was built for war-industry workers with several new developments. After the war, CHA developments served as transitional housing for returning veterans and low-income residents.  By the late 1950s, CHA had become the largest landlord in Chicago, with more than 40,000 units of housing.

After the 1965 landmark court decision in Gautreaux v. Chicago Housing Authority, in which a group of residents alleged that CHA engaged in racial discrimination by building public housing solely in areas with high concentrations of poor minorities, CHA was placed into receivership, which was lifted May 2010.Initially, public housing operated very similarly to private market housing, using income from rent to   cover the costs of maintenance, operations and adequate reserves, although the cost of the land   and  construction was borne by the federal government.  As the stock of public housing aged  across the country, however, the costs to maintain the buildings rose, and rents rose as well.

By the late 1970s, the spread between market rate rents and public housing rents had diminished to a point where Congress took   action.  The Brooke Amendment was passed, which required public housing authorities to only rent to those with very low or no   income.

By the time a rental subsidy program was passed in the early 1980s, the high concentrations of poverty and neglected infrastructure were severe.  By 1996, the operations of the Authority were in such disarray that the U.S. Department of Housing and Urban Development took control of the agency.

In 2000, under the leadership of Mayor Richard M. Daley, the City of Chicago agreed to take back control of CHA and drafted the Plan for Transformation, an ambitious plan that called for the demolition of notorious high-rise developments, the comprehensive
rehabilitation of all the other scattered-site, senior and lower-density family properties, and the construction of new mixed-income/mixed-finance developments.  The guiding principle behind the Plan is the comprehensive integration of low-income families into the larger physical, social and economic fabric of the city.

CHA AS A MOVING TO WORK AGENCY 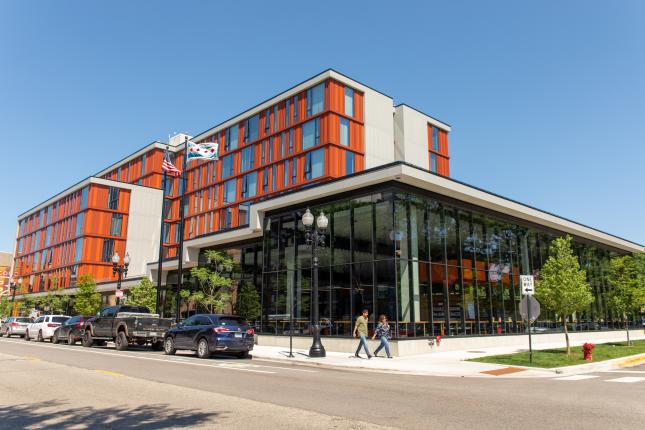 CHA is one of 39 public housing agencies participating in HUD’s Moving to Work (MTW) Demonstration Program, which was first authorized by Congress in 1996. The MTW Program gives participating public housing agencies some regulatory and funding flexibility, outlined in an MTW agreement with HUD, to adapt housing assistance programs to local needs. While participation in HUD’s MTW Program allows for certain flexibilities, participation does not result in deregulation of the agency. MTW participation does require direct oversight and approval of MTW activities in addition to many standard applicable regulations and approval processes that non-MTW agencies are also required to follow. As part of the MTW Agreement, agencies must also submit MTW annual plans and reports to HUD, and agencies are required to request approval for and report on the use of MTW flexibilities. All MTW activities must fall under one of the three Statutory Objectives: