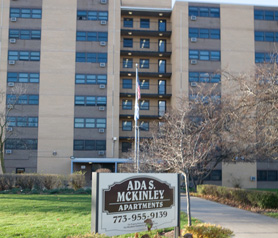 The Ada S. McKinley Senior building was named after Ada Sophia Dennison-McKinley, a retired schoolteacher from Austin, Texas. She was a volunteer at the War Camp Club, a civic center that served returning soldiers and their families during World War II. The development is age-restricted with 125 one bedroom homes in a nine story elevator building. The development was formerly known as 69th and South Chicago Apartments and was built in the 1960s.